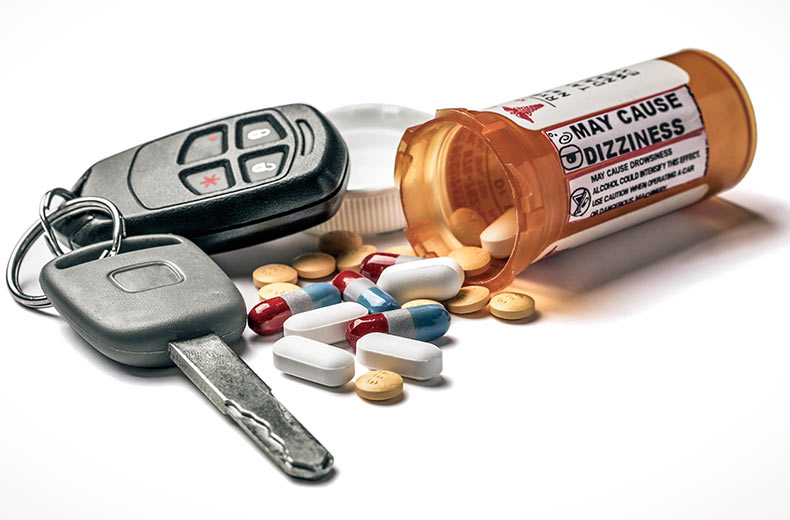 Drugs, including illegal drugs, prescribed medicines and over-the counter medicines, can also reduce the ability to drive safely. It is illegal to drive, attempt to drive, or be in charge of a motor vehicle, with certain drugs in the body above a specified limit.

The law sets very low limits for the eight illegal drugs, so even a very small amount would put a person over the limit. The limits for the eight prescription drugs are higher than normal prescribed doses. So someone taking a medicine under the advice of a healthcare professional or as printed in the Patient Information Leaflet, should not exceed the limit. However, they must still be fit to drive, so anyone taking medicines should talk to their doctor, pharmacist or healthcare professional before driving.

Although this offence applies to specific drugs, there is also a wider law which makes it illegal to drive while unfit due to any drug, whether illegal or prescribed or over-the-counter medicines. The penalties for drug driving or driving while unfit through drugs are the same as for drink driving:

Other consequences can include job loss, higher motor insurance and trouble getting into other countries. The ultimate penalty is having to live with injuring or even killing another person.

Around 55 people are killed each year in accidents involving drivers who were impaired by drugs (including legal ones), over 250 are seriously injured and around 750 slightly injured. However, this is likely to be an under-estimate. Drugs can affect a driver’s behaviour and body in a variety of ways (depending on the drug). These can include:

The effects can last for hours or even days, and vary from person to person. They can be difficult for an individual to detect.

For many medications it is difficult to predict whether, how, when and for how long they will affect a person’s ability to drive safely. A driver may not even notice that they have been impaired until it is too late. The effects depend on how much, how often and how a medicine is used, plus the psychological and physical attributes of the person taking it. Some medicines may cause:

A person’s driving ability can also be affected by the medical condition for which they are taking the medicine. However, it is very important to take any medication that has been prescribed, and to follow the instructions on how to take it. Therefore, anyone who is taking medication that may affect their driving should follow the advice of their doctor or other healthcare professional. Many over-the-counter medicines, including remedies for coughs, colds, flu and hay fever, cause unwanted drowsiness which might impair driving.

What can I do as an Employer?

Review your existing workplace drug and alcohol policy to see how it can encompass driving.

Ensure that staff and/or their safety representatives are fully consulted about the organisation’s policies on alcohol, drugs, and safe driving and that this is reviewed periodically in joint health and safety committee meetings.

Ensure all staff, including directors and managers, understand that everyone who drives for work must be fit to do so at all times. All managers should lead by personal example and follow the organisation’s policy.

In particular, ensure that all staff, including senior managers and line managers, understand that they must not drive for work if their ability to do so safely is affected by alcohol, drugs or medicines.

Driving while under the influence of alcohol or drugs should be a serious disciplinary matter. Do not allow alcohol (or drugs) to be consumed by staff on duty, even, for example, if they are entertaining clients. Advise staff not to drink at lunchtime, especially if they are driving later. Remind them that it takes hours for the body to get rid of alcohol – they can still be impaired on their journey home or the following morning.